So Karver had a big day yesterday. He cut his first tooth, had to go the hospital for the Croup and traded some stock. Maybe everything except for the stock trading. Anyway he was sounding really bad so we took him in. They did some test and then the radiologist came in and prepared us for the "mean machine" in which you can see Karver below. He said it is harder for the mom than the child and he will probably cry and yady yady ya da. We put him in there and he was so content. We couldn't help but laugh.
Here he is on round two of the x-rays. 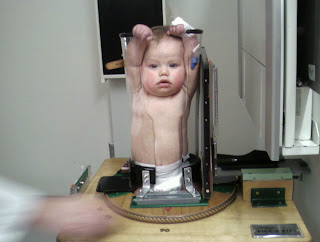 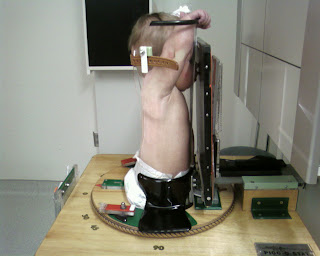 ha ha. What a weird little machine...That is so funny! What a little trooper! Hope he's feeling better.

That machine looks so homemade. Are you sure this wasn't just for the hospital's enjoyment? :)

He is adorable even squished in a tube! Is there ever a time when he is not so stinkin' cute?

How scary though! Are you guys okay? Do you need anything? I will say a little prayer that he will be all better ASAP!!!

How is that tooth treating you Jackie? I dread the day the teeth make their way out!

That is the cutest, funniest picture I have ever seen! I hope he's feeling better. Sick babies are so sad.

He is Mike's son, of course he would enjoy a machine like that! And, I have to comment that since you have a face on picture and a side picture, it kind of looks like you put up his mug shots... Karver: guilty of biting Mom crime.

I gotta say that looks so sad but hilarious all at the same time. How funny that he didn't cry!

I didn't even know that such a thing existed, that's terrible! I'm glad he was such a good little guy, though, so very brave...or maybe just so sick that he didn't even care. I hate it when babies are sick, it's the worst. Hope he gets feeling better!

oh I couldnt help but laugh. It was so sad to see him like that. poor guy I hope he is doing better. I hope you guys had a good time on your trip.

Before I read the post I thought you had set him up for some sort of horrible cut him in half magic trick.. eeekk.
whew, just croup. But glad he's feeling better ( I saw him today at Jean-Maries)

Oh My! That is a "Mean Machine". At least he didn't cry, but it made me want to! How perfectly awful. The things doctors make our kids do so they can get "better"!

Mike, I thought you photoshopped that... How is he doing?

That is the silliest, saddest thing I have ever seen.